The other MotoGP championship battle to get excited about

By: adminOn: 3 November 2020
The other MotoGP championship battle to get excited aboutReviewed by adminonTuesday, November 3rd, 2020.This Is Article AboutThe other MotoGP championship battle to get excited aboutWhile the most unpredictable MotoGP title fight in modern times dominates the headlines, the premier class rookies are producing their own personal tussle having picked up from where they left off in the junior classes, says LEWIS DUNCAN The 2020 MotoGP season truly has been a banner one for the world championship in its 71st […]
Prev
Next

While the most unpredictable MotoGP title fight in modern times dominates the headlines, the premier class rookies are producing their own personal tussle having picked up from where they left off in the junior classes, says LEWIS DUNCAN

The 2020 MotoGP season truly has been a banner one for the world championship in its 71st anniversary year. MotoGP may have been unable to escape COVID-19’s claws, but the wait for it to get going was worth it as eight different riders have won in the last 11 grands prix and 32 points cover the top six in the championship with just three rounds to go.

The never-ending, nerve-shredding, age-accelerating stings in the tail MotoGP has delivered this year have been truly breathtaking, and with a bit of luck the battle between Joan Mir, Fabio Quartararo, Maverick Vinales, Franco Morbidelli, Andrea Dovizioso and Alex Rins will go down to the wire in Portugal in three weeks’ time. But while all eyes are fixed – rightly – on the title fight, there is another battle brewing worthy of attention.

The rookie of the year challenge is finely balanced ahead of the Valencia/Portugal triple-header that will bring the curtain down on the 2020 season (COVID interruption notwithstanding, though organisers insist the final races will still take place). All three rookies still mathematically have a shot at that particular crown, with 75 points up for grabs.

Tech3’s Iker Lecuona is firmly an outside bet given his 40-point deficit, though, with the honours set to go to either KTM stablemate Brad Binder or Honda’s Alex Marquez – both of whom are currently sat on 67 points.

Fittingly the top two riders in the Moto2 standings in 2019, with champion Marquez leading Binder by three points at the final chequered flag in Valencia last November, their campaigns in 2020 have been an intriguing subplot within the overarching narrative.

For the first half of the season, it looked like the rookie of the year title was merely a formality for Binder. Though Marquez beat him to 12th in the opening Spanish Grand Prix, Binder’s pace would have put him on the podium had it not been for an early mistake that sent him off-track and out of the top 10.

A clumsy incident with Tech3 KTM counterpart Miguel Oliveira at Turn 1 in the second Jerez race, and his eventual crash, allowed Marquez to steal a march when he steered through the attrition ahead to claim eighth on the RC213V.

But the pace Binder had shown at Jerez burst through to the fore at the Czech GP, when he dominated by over five seconds to claim a sensational maiden victory for himself and KTM. Finishing fourth at the following Austrian GP put him 24 points clear of Marquez. Binder’s take from the following races – an eighth in the Styrian GP and 12th at the San Marino GP – marked a dip in form, but non-scores for Marquez strengthened his position.

PLUS: The MotoGP rookie who promises a golden future for KTM

However, he squandered podium pace in the Emilia Romagna GP with an early crash and hasn’t cracked the top 10 since, with 11th at Catalunya, 12th at Le Mans, 11th at the first Aragon race and a crash in the second his scorecard of late.

“We’ve had some really good ups and downs this year, but lately we’ve had quite a few downs in a row,” Binder said at Aragon last month. “So I’d quite like to turn things around and finish the season in a way I know we can. The speed is there, I’ve been missing maybe a couple of tenths which would make such a massive difference. I want to try and clear everything out and go to Valencia and start fresh.”

The absence of Alex’s brother Marc Marquez may have been – in a bleak way – a blessing, as it forced Honda to try and adapt the difficult RC213V to riders not as anomalous in terms of riding style

Binder’s downturn in form on the KTM coincided with Marquez’s emergence on the Honda. The 2020 RC213V had a troubled start to life, its aero package causing severe turning problems throughout testing. With the problem only diagnosed on the final day of the Qatar test, the winter was rendered largely useless.

For reigning Moto2 champion Marquez, it meant he wasn’t given much of a chance to simply ride his bike. Though he scored points from the first four rounds, he was nowhere near the podiums Binder was able to make a regular target. A disastrous San Marino GP weekend, in which he qualified 21st and finished seventh marked the turning point. On the test after the race on the Tuesday, Marquez tried numerous new parts – most notably a suspension upgrade, a new chassis and a tweaked wheelbase – before being allowed to just go and spin some laps to understand the bike.

He charged through seventh from 17th in the Emilia Romagna GP, before scoring back-to-back podiums at a wet Le Mans and the Aragon GP – the latter very close to being victory, having crossed the line just under three tenths behind Suzuki’s Alex Rins. In the five races from the Emilia Romagna GP to the first Aragon round, Binder scored 14 points while Marquez chalked up 52. 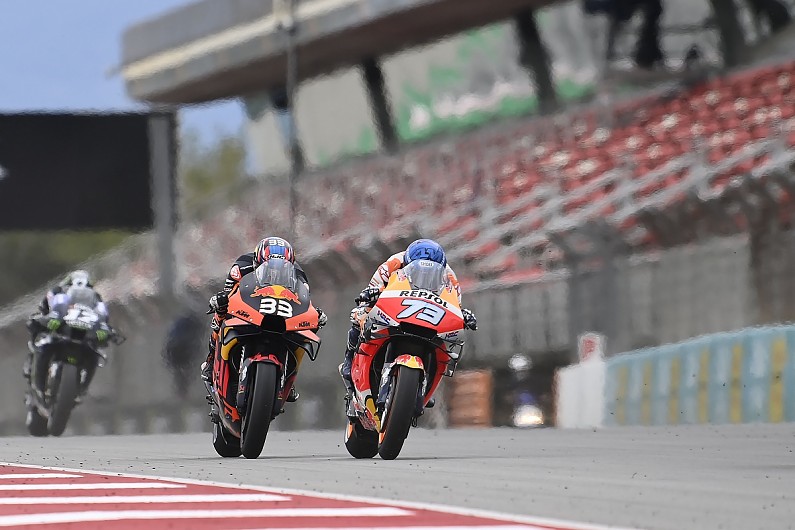 “When a rider arrives in a new category, he needs an adaptation process,” Marquez’s crew chief Ramon Aurin told Autosport’s sister site Motorsport.com in its Spanish MotoGP podcast. “Some adapt faster than others. In the case of Alex, I would say that so far he has gone step by step, but always forward. Probably no one expected [the podium] to arrive so soon.”

The absence of Alex’s brother Marc Marquez may have been – in a bleak way – a blessing, as it forced Honda to try and adapt the difficult RC213V to riders not as anomalous in terms of riding style. But to doubt that he was ever good enough was foolish, regardless of his early-season form. This is, after all, the bike that effectively ended triple world champion Jorge Lorenzo’s career and finding success immediately was never realistic to expect.

PLUS: How Honda has fixed a bike that only Marc Marquez could ride

The KTM, in contrast, is still a young motorcycle and was still in a big developing phase over the winter. The RC16 Binder rode in the first test in Malaysia was drastically different to the one he was “stone last” on in the Valencia post-season test in 2019. KTM’s extensive testing programme with its race riders (something it could use due to the concessions it held pre-season) as well as with test rider Dani Pedrosa gave it a distinct advantage at several tracks – namely at Brno and the Red Bull Ring. That it struggled in the first Misano race was a surprise, given the race riders’ tested there in June.

Marquez wasn’t afforded the same testing opportunities due to Honda being a non-concession manufacturer.

This weekend’s European GP at the Ricardo Tormo Circuit near Valencia represents a level playing field for the two rookies to lock horns. Both have prior knowledge of the circuit on MotoGP machinery, with the pair split by 0.132s at the bottom of the time sheets in the test last November. Binder has won twice at the venue in Moto2 and Moto3, while Marquez only managed a best of second in 2018 Moto2 race.

Pedrosa tested at Ricardo Tormo late last month, which could provide Binder with a crucial advantage. The two Valencia rounds are expected to be run in cold conditions, with KTM struggling in the Catalan GP and the first Aragon race chiefly because the temperatures weren’t suitable for its preferred harder front compounds.

Marquez’s strong run at Aragon can in part be attributed to the nature of the circuit, which suits the RC213V. Honda riders have won the Valencia GP in five of the last 10 years, and while the tighter nature of the circuit doesn’t necessarily suit the current bike, the way the RC213V behaves when grip is at a premium will play into Marquez’s hands. As will the way the Honda generates heat in the front tyre. 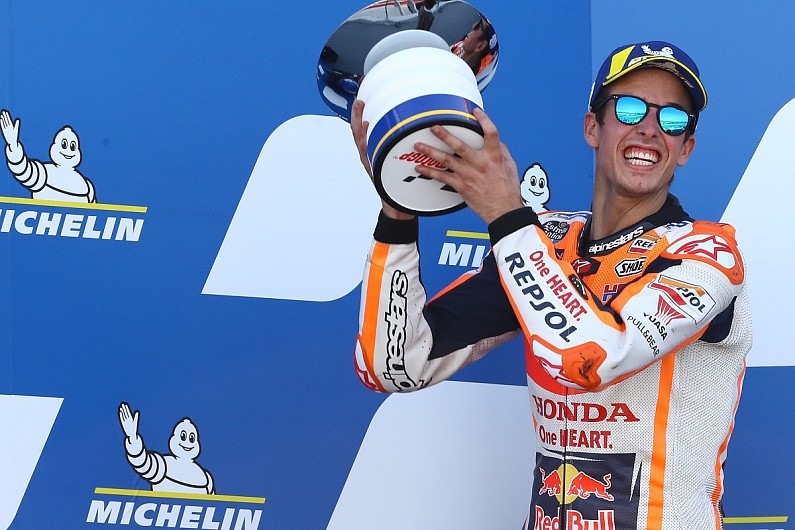 To totally rule out Tech3 rider Lecuona from this fight would be unfair. He made his MotoGP debut at Valencia last year as replacement for the injured Oliveira and was on for some points before crashing out.

His has been a tough rookie season, given his grand prix experience is 89 outings less than that of Binder’s. But Lecuona comes into the final triple-header off the back of a small purple patch, having equalled his best result of the season of ninth in the Teruel GP, qualified a career-best 11th and helped Pol Espargaro on the factory RC16 to a strong fourth through his set-up work in practice.

Overhauling a 40-point deficit to both Binder and Marquez will be a tall order in three rounds, but the drama in 2020 certainly isn’t restricted to befalling just the frontrunners – not least with the total unknown of the Algarve circuit ending the season.

In all likelihood, the rookie of the year prize will go to either Marquez or Binder. Both would be immensely deserving of it, but perhaps for the Honda rider it would hold a greater weight to repeat what his elder brother achieved in 2013 given the doubt levelled at the younger Marquez this year, as he’s successfully forged his own path out of Marc’s shadow. 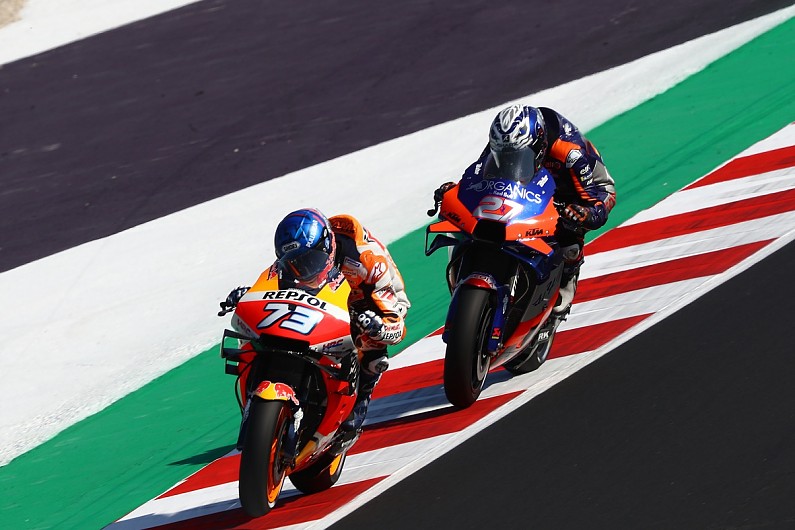